Today’s working teenager may be a retail company’s future store leader, product designer, data analyst or even CEO. Unfortunately, in the years ahead it may become increasingly more difficult to find these young entry-level employees.

Teenagers are an important part of the retail workforce, but Bureau of Labor Statistics data shows a downward trend in teen participation across all industries. At its peak in 1979, 58 percent of teenagers aged 16-19 held jobs; starting in the early 2000s, however, when the rate was at 52 percent, we’ve seen a more dramatic drop with a post-recession rate of about 34 percent of teenagers working.

Contrary to what adults might assume, it’s not because teenagers are lazy; there are other factors at play. BLS analysis ties the teen labor participation drop-off to greater societal shifts, rather than an actual lack of jobs available for teenagers. In the last couple of decades, parents have placed greater emphasis on the rewards of education, diminishing the traditional push to get a first job. BLS also says rising college tuition rates could be blamed for fewer teenagers working, as entry-level wages aren’t expected to make a dent in a large tuition bill.

Many young adults are entrepreneurially minded and are finding non-traditional ways of making money. Side hustles like selling handmade items on Etsy or monetizing a YouTube channel are jobs that aren’t tracked by the Bureau of Labor Statistics. According to NRF and IBM’s global study of Gen Z consumers, 22 percent of 16- to 18-year-olds say they make money online and 16 percent say they work for themselves.

Whether they’re ditching jobs in favor of studying or extracurricular activities, many teens today just don’t want to work. Only one out of every 10 teenagers without a job actually wants a job (according to the Current Population Survey); in the mid-1990s this number was double. 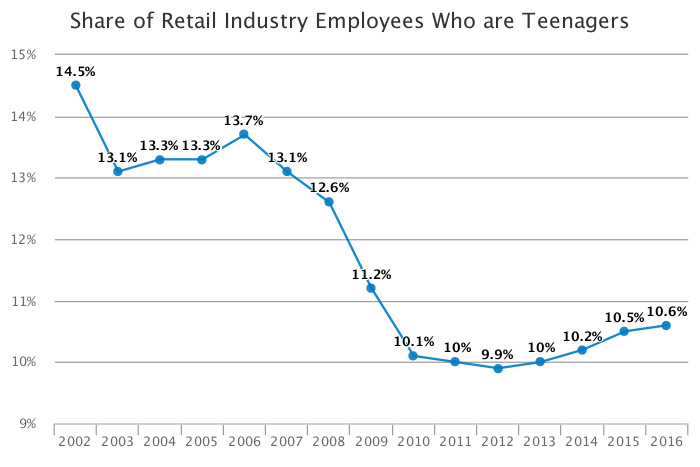 Since 2008, retailers have employed at least 55 percent of working teenagers, more than any other industry.

What this means for retail

The total number of teenagers in the workforce has declined, and the same trend can be seen in the retail industry. (For purposes of this analysis and most NRF research, restaurants are included in the retail category). In the early 2000s between 13 and 15 percent of retail industry employees were teenagers; post-recession, the number is now between 10 and 11 percent of employees. Not a dramatic drop, but still significant.

Does this indicate retailers are employing fewer teenagers? Not at all. In fact, retail companies are continuing to employ more teenagers each year post-recession. The retail industry relies on teenagers to fill entry-level jobs, just as teenagers rely on retail for much-needed cash and real-world skills training. Since 2008, retailers have employed at least 55 percent of the country’s working teenagers, more than any other industry and more than pre-recession; fewer teenagers are working in other non-retail industries than before. 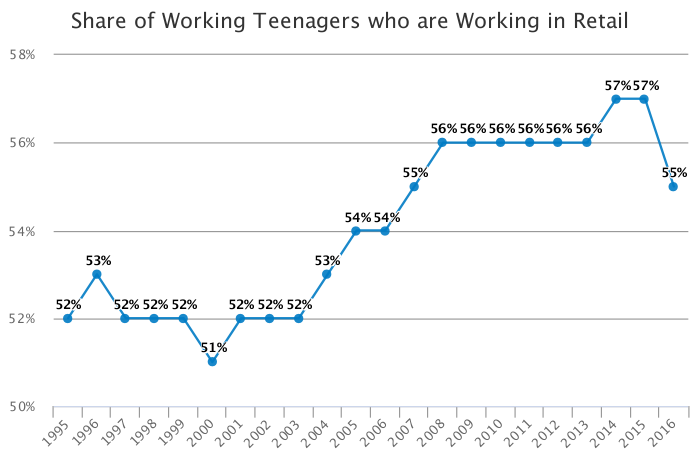 Although jobless teens may be focusing their energies on AP classes and soccer camp — or testing all the Snapchat filters — they’re missing the opportunity to earn resume line-items they’ll need for future employment. NRF’s research shows hiring managers across industries stress that a first job as a teenager is crucial for long-term career success. Employers value retail experience, and working in retail — no matter what career a teen wants to have later in life — provides important foundational skills.

“The beginning of every success story is ... always the same: the first job.”

“The beginning of every success story is ... always the same: the first job,” NRF’s Ellen Davis wrote on LinkedIn. “The position that empowers an individual to build poise and professional skills, refine their career goals and rise to management and executive-level positions.” First jobs teach work skills early, such as time management, customer service and how to work with others on a team. These jobs are the training ground on the tough lessons you want to get behind you early (like taking critical feedback or following directions from a superior), so that when it’s time to go for that marketing internship junior year of college, or even a coveted office job at the admissions office, there are proven skills backing up the application — making a young person a more desirable candidate and a successful employee.

Many retail brands have started to implement, or at least consider, recruitment marketing strategies geared toward teen employees. Training and credentialing can also be part of the answer: More than 30 leading retailers have come together with the NRF Foundation to launch RISE Up, which helps people — regardless of education, background, economic means or age — acquire the skills they need to secure jobs in retail and advance into promising careers. Learn more about RISE Up and get involved.