The evolution of Halloween: 3 trends to watch

Unlike more traditional holidays, Halloween is less rooted and more flexible. Everything from who celebrates, how they celebrate and what they wear while celebrating is up for interpretation each year, keeping retailers on their toes. NRF’s research team recently looked at data from our annual survey conducted by Prosper Insights to identify three shifts in consumer behavior that retailers will want to keep an eye on:

Millennial consumers (ages 18-34) are now the most likely of all adult generations to participate in Halloween. They’re also one of the top spenders on Halloween costumes, spending an average $42.39 compared with $31.03 for all adults. This cohort has big plans for those costumes too: their intent to attend parties is up 10.9 percent from 2006.

So what’s with the sudden interest in this holiday? It could be social media. A decade ago, a partygoer could get away with showing up without a costume and nobody would know except the people in the room. In 2016, consumers have ideas and tutorials at their fingertips. Nearly three in 10 adults ages 18-34 (28.4 percent) turn to Pinterest and 23.3 percent turn to YouTube for costume inspiration. Interestingly, men and women are finding their inspiration in different ways. Women are more than twice as likely to be influenced by Pinterest, while men are over 50 percent more likely than women to use YouTube.

Women are more than twice as likely to be influenced by Pinterest, while men are over 50 percent more likely than women to use YouTube.

In the era of Facebook, Instagram and Snapchat, there is no hiding a bad costume — and a clever costume makes for a buzzworthy addition to digital timelines. Retailers can be a part of the action by helping consumers find everything they need to enjoy a seasonal party. For retail Halloween inspiration, Walmart offers party tips on its website, Whole Foods collects do-it-yourself recipe ideas on Pinterest and Target pins “Epic Halloween” costume and decoration ideas.

Trick-or-treating isn’t what it used to be

The number of families planning to head out door-to-door for this tradition is up slightly from last year but still not as high as a few years back. In fact, 2016 represents the second-lowest reading for trick-or-treating (29.7 percent). This is not due to lack of celebrating, though. Community events such as parking lot “Trunk-or-Treating” and Halloween festivals are popping up across the country as alternative options. With concerns over food ingredients like sugar, gluten and nuts — and the general fear of taking candy from strangers — it’s not surprising to see parents looking for safer celebrations.

Retail stores are central gathering places in many communities and would be a natural fit for hosting, sponsoring or participating in Halloween events. With plans to dress up at the highest level ever (47 percent), hosting costume fashion shows or contests could also be an opportunity to connect with customers. The number of people planning to carve a pumpkin (45.5 percent) and visit haunted houses (20.9 percent) is also up, indicating that enthusiasm for candy might be fizzling in favor of experiences and events. 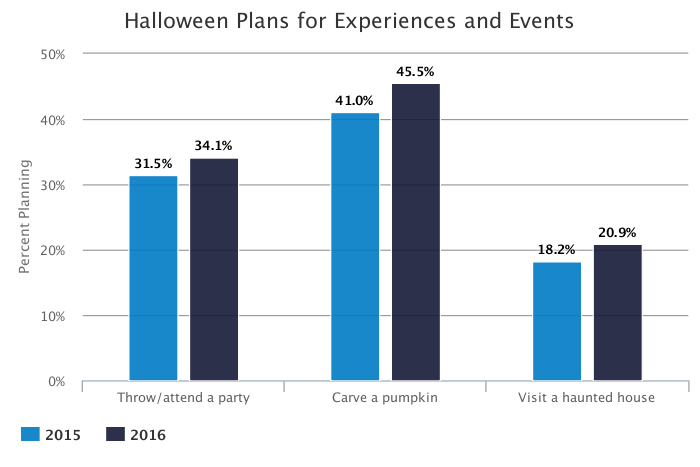 Kids can (and will) be anything they want to be

NRF’s annual “Top Costumes” survey doesn’t divide rankings by gender, but with a recent shift from “princess” to “superhero” as the top costume, there’s reason to believe that both boys and girls are influencing the trend. From Star Wars’ Rey to the Supergirl television series to an upcoming reboot of Wonder Woman, pop culture is providing girls with plenty of action hero inspiration.

A shift toward gender-neutral styles has reached children’s clothing and children’s toys to the point that pet owners are wondering if their dog and cat costumes are sexist. With children’s costume spending expected to reach an all-time high of $1.17 billion and 16 percent of consumers planning to dress up their pets, retailers should remain sensitive to gender stereotypes, noting that parents and pet owners will be as well.