Holiday budgets are set in pencil, not stone

Consumers keep a tight grip on their wallets over the holidays, right? Maybe not. Despite their lists and budgets, NRF’s survey conducted by Prosper Insights & Analytics found 40 percent of consumers spent at least $50 more than they originally planned during the 2015 holidays. One in eight shoppers went more than $200 over budget.

With a contentious presidential election at the beginning of the 2016 shopping season, 43 percent of consumers noted that they’re being more cautious with their spending. But in NRF’s most recent flash poll — conducted by ORC International in October — nine in 10 admitted they could be convinced to spend an extra $25 this holiday season that they didn’t originally budget for. 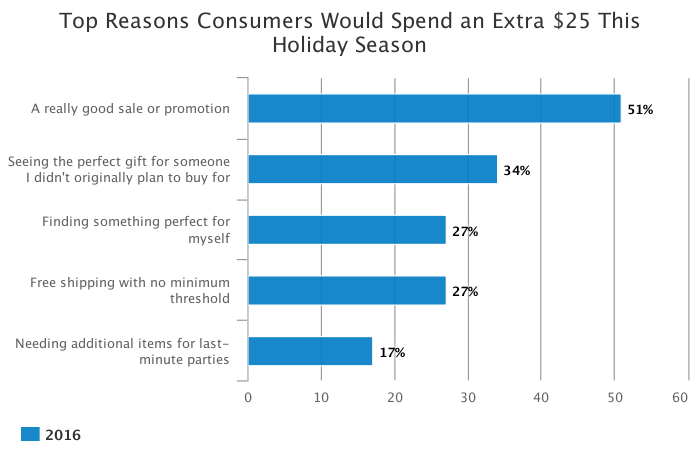 Consumers have provided detailed insight into how they’d be swayed.

Who can resist a generous deal? Apparently not the 51 percent of consumers who would likely spend more than planned when faced with a good sale or promotion. Generation X shoppers are the most willing to cave to a deal (55 percent). For this reason, we’re likely to see deals and discounts — which many retailers began announcing right after Halloween — touted far and wide through the end of the year.

The holiday season is list season, but it’s easy to miscount cousins when tabulating the gifts needed. A third of consumers know this situation all too well, admitting they could be persuaded to spend more than planned if they spot a perfect gift for someone who’s not on their list. Millennials, who are now solidly into adulthood (and perhaps newly responsible for buying gifts for nieces and nephews or co-workers), are more likely than their older counterparts to spend more in this situation.

Retailers that provide reminders and ideas for gift lists may be able to capture that extra spending. It’s worth suggesting a “from me, to me” line on that list as well; “Treat Yo’Self” has grown beyond a “Parks and Recreation” meme and into a mentality that can be channeled during the holiday season. In fact, one-quarter of consumers admit they could be swayed to spend more money just by seeing something fabulous for themselves.

Featuring “limited-time” or unique merchandise is a strategy retailers can use to capture the attention of Millennial shoppers. This holiday season, one in five Millennials say they would bend their budget for something that’s hard to come by.

We’ve all been there, frantically searching for something at the last minute to bring to a party. Whether it’s a gift for the white elephant game, flowers for the host or candy to share, 17 percent of consumers are likely to spend a bit extra on these last-minute party plans. In situations like these, time is of the essence. Retailers have been implementing new strategies for consumers to get what they need quickly, and will likely be promoting these time-savers throughout the holiday season.

Sometimes consumers just need a little something extra to get them to spend more. Free shipping that doesn’t require a minimum threshold is one of those things, and is likely to influence 27 percent of consumers to go over their intended spending limit. Women (31 percent) are significantly more likely than men (22 percent) to cave to this convenience. Best Buy, for example, is offering free shipping on all online orders for the holidays in an effort to boost sales and attract customers.

Retailers looking for a hook with the older generation of shoppers should consider touting an easy, hassle-free return policy, as this would likely convince 15 percent of those ages 65 and older to spend a little more.

Retail associates could help customers find what they’re looking for — or maybe something they didn’t know they were looking for — and push the sale over the finish line. Personal shopping and subscription services have been popular in recent years. This trend responds to consumers’ desire for extra help and advice: One in 10 admit they could be upsold to a higher-quality product than what they planned to purchase, while others say a knowledgeable and friendly salesperson could convince them to buy something that’s not on their list.

Shoppers can be convinced to spend more than they originally budgeted for, but may need a little convincing or inspiration. Retailers can try these tactics to earn more of those spontaneous sales.