WASHINGTON – With the election behind them, consumers are eager to see the deals retailers will offer for the biggest shopping weekend of the year, with 59 percent of Americans – an estimated 137.4 million people – planning to or considering shopping during Thanksgiving weekend, according to the annual survey released today by the National Retail Federation and Prosper Insights & Analytics. The numbers, which cover Thanksgiving Day, Black Friday and Small Business Saturday plus Sunday, include both in-store and online shopping and are up from 58.7 percent or 135.8 million people last year.

“Black Friday remains one of the busiest shopping days of the year, with Americans planning to take advantage of aggressive in-store and digital promotions over the entire holiday weekend,” NRF President and CEO Matthew Shay said. “Retailers know consumers are spreading out their holiday budgets to shop throughout the season. While there’s no doubt of the incredible promotions offered during the weekend, the holiday shopping season is long and consumers will look for and expect great deals down to the very last minute.”

The survey found that 21 percent of weekend shoppers plan to shop on Thanksgiving Day, nearly the same as last year’s 22 percent. But Black Friday will remain the busiest day of the holiday weekend with 74 percent planning to shop that day, the same as in 2015. A substantial 47 percent are expected to shop on Saturday; of those shoppers, 24 percent say they will be doing so specifically to support Small Business Saturday, up from 22 percent last year. On Sunday, 24 percent expect to shop.

“Millennials continue to drive the trend of hitting the stores – both on their feet and online – as soon as the turkey is finished,” Prosper Principal Analyst Pam Goodfellow said. “Whether they’re hoping to find gifts for themselves or for the folks on their lists, they will do their research to find the best deals of the weekend and have allotted a large part of their holiday budget for Black Friday, Small Business Saturday and Cyber Monday spending.”

“For many millennials, every Thanksgiving weekend they can remember has involved hopping online to find the best deals,” Goodfellow said. “For this group, it’s more than just a weekend of good deals, it’s a holiday tradition.”

While not included in the 137.4 million total for the Thanksgiving weekend, 36 percent of consumers say they plan to shop online on Cyber Monday, up from the 34 percent in 2015. Full data results surrounding this survey will not be published on NRF.com. News media and analysts who require additional information can contact press@nrf.com. 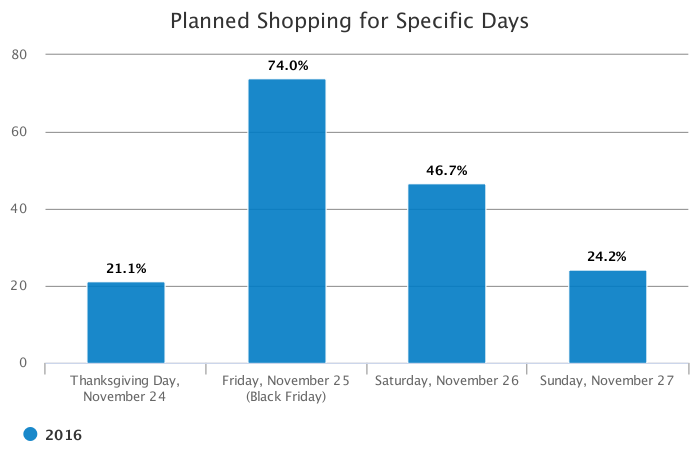 CyberMonday.com turns 10
Even Cyber Monday will get in on the Black Friday frenzy, with the 10-year-old website CyberMonday.com promoting “Deal of the Hour” offers from hundreds of retailers throughout the day on Black Friday. The deals include:

Offers will include dollars off, free gifts with purchase and free shipping specials. NRF will announce Cyber Monday promotions on November 27.

NRF Thanksgiving weekend results and weekend contact information
NRF will release the results of its Thanksgiving weekend survey by 2:00 p.m. ET on Sunday, November 27. Information will include what time people started shopping on Thanksgiving Day and Black Friday, how many people shopped for Small Business Saturday and the percentage of those shopping online over the weekend. That day NRF will also release the annual Cyber Monday Expectations survey. Additionally, NRF will host a media call with Matthew Shay at 2:00 p.m. Sunday, November 27. An advisory will be sent to retail, trade and business media in the coming days.

NRF offices will be closed on Thanksgiving Day and Black Friday, but members of the media relations team will be available from 9 a.m. until 5 p.m. on Black Friday. To request a print or broadcast interview, contact Ana Serafin Smith or Treacy Reynolds at press@nrf.com or 855-NRF-PRESS.