"With stronger employment levels and a continued increase in wages, consumers are spending more and we are optimistic that they will continue to do so throughout the rest of the year."

WASHINGTON – With consumer confidence rising and more young people in school, back-to-college spending is expected to hit an all-time high this year while back-to-school spending is expected to see its second-highest spending level on record, according to the National Retail Federation’s annual survey conducted by Prosper Insights and Analytics. Total spending for school and college combined is projected to reach $83.6 billion, a more than 10 percent increase from last year’s $75.8 billion.

“Families are now in a state of mind where they feel a lot more confident about the economy,” NRF President and CEO Matthew Shay said. “With stronger employment levels and a continued increase in wages, consumers are spending more and we are optimistic that they will continue to do so throughout the rest of the year. As students head back to the classroom, retailers are prepared to meet their needs whether it’s for pencils and paper, shirts and pants or laptops and tablets.” 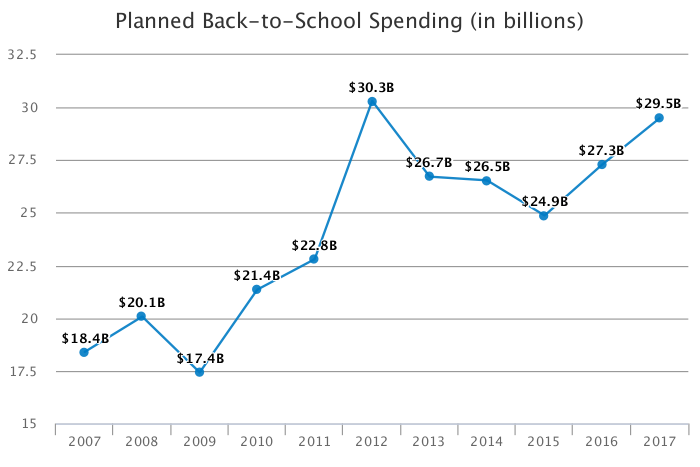 Back-to-School Spending
Families with children in elementary through high school plan to spend an average $687.72 each, for a total of $29.5 billion, an 8 percent increase from last year’s $27.3 billion. Total spending is the second-highest in the history of the survey following a peak of $30.3 billion in 2012.

According to the survey, back-to-school shoppers plan to spend $10.2 billion on clothing (purchased by 95 percent of respondents), $8.8 billion on electronics such as computers or calculators (60 percent), $5.6 billion on shoes (93 percent) and $4.9 billion on school supplies such as notebooks, folders, pencils, backpacks and lunchboxes (97 percent). Parents say they will spend an average of $238.89 on clothing, $204.33 on electronics, $130.38 on shoes and $114.12 on school supplies. While consumers plan to spend more across all categories, shoes and school supplies seeing the highest expected increase.

“Schools are changing their classroom experience to include more technology including laptops and tablets,” Prosper Principal Analyst Pam Goodfellow said. “That is why many parents, specifically Millennials, are spending more during back-to-school season and taking advantage of retailers’ best deals to stretch their budgets.”

According to the survey, 65 percent of back-to-school shoppers say half or more of their purchases are a direct result of their children’s influence, up from 57 percent last year. And while children’s influence is growing, so too is their willingness to help their parents pay the bill: teenagers will contribute $37.64, up from last year’s $32.90, and pre-teens will contribute $27.09, up from last years $20.08.

More families will tackle their back-to-school lists early this year with 27 percent beginning two months before the beginning of school, up from 22 percent last year. But not all shoppers are early birds, 21 percent will wait until the last week or two before school starts, about the same as last year’s 22 percent. Of those shopping early, 60 percent say they are trying to spread out their budgets, 48 percent don’t want to miss out on sales and 43 percent want to avoid crowds.

When it comes to where parents will buy, they are shopping across a variety of retailers; 57 percent will shop at department stores, 54 percent at discount stores, 46 percent each at clothing stores and online, and 36 percent at office supply stores. For those shopping online, 91 percent plan to take advantage of free shipping and 54 percent will buy online and pick up in-store. 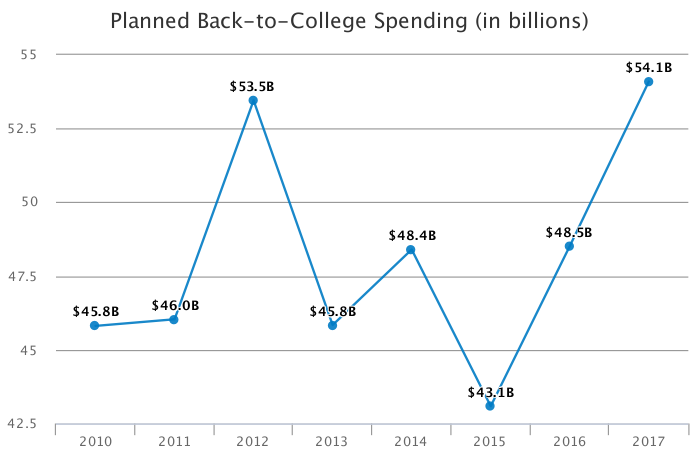 College Spending
College students and their families plan to spend an average of $969.88, up from last year’s $888.71. Total spending is expected to be $54.1 billion, up from $48.5 billion last year and surpassing 2012’s record of $53.5 billion. The increase in spending is driven, in part, to growing college enrollment. According to the National Center for Education Statistics, college enrollment has steadily increased over the last five years and is projected to reach nearly 21 million this fall.

Also similar to K-12, more back-to-college buyers are shopping early. This year, 32 percent will start two months before school compared with 26 percent last year. And only 21 percent will leave shopping until the last week or two before school starts, down from 25 percent last year. Of those shopping early, 64 percent are trying to spread out their budgets, 41 percent don’t want to miss sales and 37 percent want to avoid crowds.

The survey of 7,226 consumers asked about both back-to-school and back-to-college plans and was conducted June 30-July 5 and has a margin of error of plus or minus 1.2 percentage points.