Heading into the second half of the year, we are optimistic that overall economic growth and consumer spending will continue to improve as they did in the first two quarters of the year.

With back-to-school spending on a “stock up” cycle rather than a “make do” cycle, the average family is expected to spend more freely on school and college supplies this year, according to the National Retail Federation’s annual survey conducted by Prosper Insights and Analytics. Total spending for K-12 and college is expected to reach $75.8 billion, up from last year’s $68 billion.

“Families are still looking for bargains, but there are signs that they are less worried about the economy than in the past,” NRF President and CEO Matthew Shay said. “Heading into the second half of the year, we are optimistic that overall economic growth and consumer spending will continue to improve as they did in the first two quarters of the year. We fully expect retailers to be aggressive with offering great deals both in stores and online for back to school shoppers. And retailers will keep a close eye on inventory levels as families spread out their shopping throughout the summer.”

Families with children in grades K-12 plan to spend an average $673.57 on apparel and accessories, electronics, shoes and school supplies, up from last year’s $630.36 for a total of $27.3 billion, according to the survey. That’s an increase of 9.6 percent from last year’s $24.9 billion and compares with a total growth of 54.8 percent over the past 10 years.

The numbers follow a pattern in which spending often increases one year as families stock up on supplies only to drop off the next as they get a second year out of longer-lasting items like backpacks or computers. Spending then increases in the third year once children outgrow clothing or items need to be replaced. 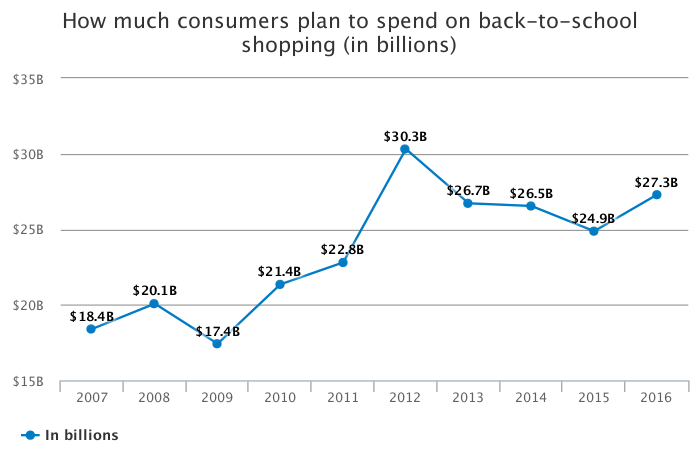 Consumer confidence in the economy continues to grow and is a significant factor in how families will spend for back-to-school this year. A few more families are shopping for sales (43 percent, up from 41 percent) or comparing prices online (32 percent, up from 31 percent). But the number who saying they are spending less overall is down at 23 percent compared with 27 percent last year. And the number who say the economy will have no effect on their plans is at 27 percent, up from 24 percent last year and the highest level in the survey’s history.

“The budget-conscious consumer is not forgetting about price, quality or value, and we continue to see this when it comes to back-to-school shopping,” Prosper Principal Analyst Pam Goodfellow said. “That is why many parents are taking advantage of shopping early, scouring ads and websites for the best deals, and taking advantage of free shipping with online purchases.”

More families are tackling back-to-school lists earlier this year with 73 percent beginning about a month to two months out from the beginning of school, up from 62 percent last year. Only 22 percent are waiting for the last week or two, down from 30 percent. A total of 75 percent of those shopping early say they are trying to spread out their budgets, 63 percent of early shoppers don’t want to miss out on back-to-school sales and 51 percent want to avoid crowds.

While discount stores continue to be the choice of the largest share of shoppers at 61 percent, the number is at its lowest level in the survey’s history. But 46 percent of parents said they would shop online, a dramatic jump from last year’s 36 percent. The vast majority of online shoppers plan to take advantage of free shipping (89 percent of those surveyed) and conveniences like buy online, pick up in store (54 percent).

Bigger Kids, Bigger Bills
College students and families with children in college plan to spend an average of $888.71, according to the survey. That’s down slightly from $899.18 last year, but total spending is expected to be up at $48.5 billion compared with $43.1 billion last year due to an increase of consumers shopping for back-to-college.

“Whether it’s laptops for class or mini-fridges for the dorm, college simply costs more than the lower grades,” Shay said. “Some of these big-ticket items can last all four years, but when they need to be replaced it’s a bigger investment than pencils and lunchboxes. But retailers are ready to help students and parents alike stretch their dollars and make the investment in college pay off.” 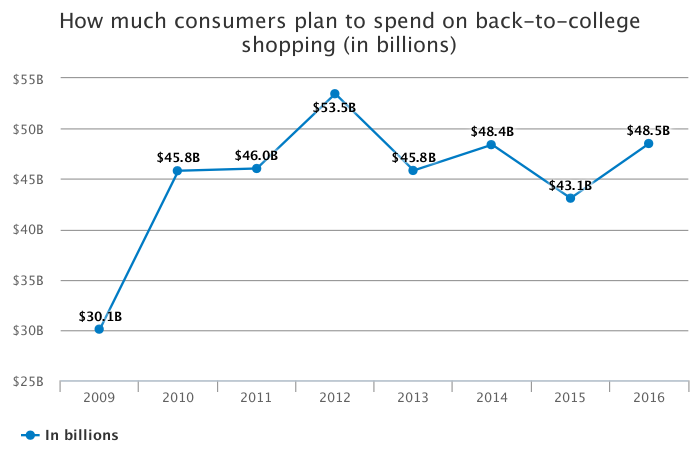 A few more college shoppers are starting early this year, with 26 percent starting two months before school compared with 24 percent last year while 25 percent will wait until the last week or two, up slightly from last year’s 24 percent. Of those shopping early, 68 percent say they are trying to spread out their budgets.

Discount stores still account for the largest share of college shopping, visited by 44 percent of consumers, but the number is at its lowest level in the survey’s history. Only 34 percent will visit a college bookstore, also a new low. Online shopping is the choice of 38 percent of shoppers, down from 39 percent last year and a peak of 45 percent two years ago.

The survey of 6,809 consumers asked about both back-to-school and back-to-college plans was conducted June 30-July 6 and has a margin of error of plus or minus 1.2 percentage points.

If you are a member of the press and require additional information or insight surrounding our back-to-school and college survey results, please contact Ana Serafin Smith at press@nrf.com.

About Prosper Insights and Analytics
Prosper Insights and Analytics delivers executives timely, consumer-centric insights from multiple sources. As a comprehensive resource of information, Prosper represents the voice of the consumer and provides knowledge to marketers regarding consumer views on the economy, personal finance, retail, lifestyle, media and domestic and world issues. www.ProsperDiscovery.com