Back-to-school shopping only at halfway mark, despite early start

“Shopping early and often is a trend we have seen from many budget-conscious consumers over the last few years.”

Although back-to-school shopping started earlier this year, families are slowly tackling their supplies lists. According to the National Retail Federation’s annual survey conducted by Prosper Insights & Analytics, the average family with children in grades K-12 has completed almost half (48 percent) of their shopping as of early August, slightly down from last year (50 percent).

“It is evident that many families are still considering price and value when shopping for their back-to-school and college needs,” NRF President and CEO Matthew Shay said. “Shopping early and often is a trend we have seen from many budget-conscious consumers over the last few years. In the weeks ahead, parents will take advantage of the aggressive deals that retailers will offer as they get ready to welcome the fall season merchandise.”

For the first time, the survey asked consumers which back-to-school items they still needed to complete their shopping list. According to the survey, 77 percent need to buy school supplies, followed by clothing (70 percent) and shoes (57 percent). 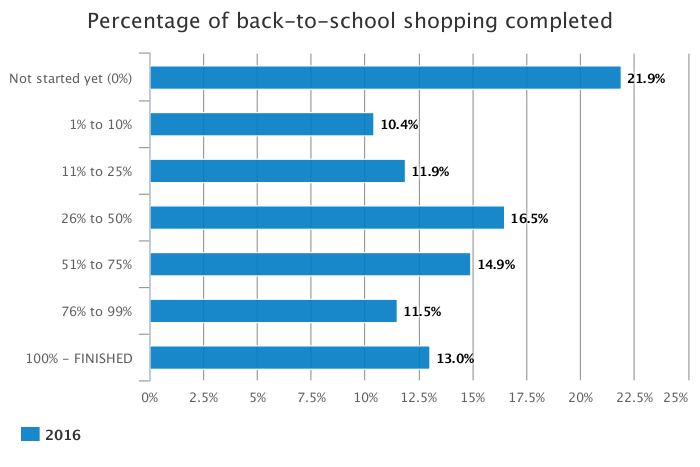 When searching for the perfect deals, 48 percent of parents are influenced by coupons, up from 43 percent last year and the highest in the survey’s history. Families will also take advantage of in-store promotions (39 percent) and advertising inserts (33 percent) to complete their shopping lists. For those who started shopping early, half (50 percent) of their purchases were influenced by coupons, sales and/or promotions.

Taking a deeper dive into classroom needs, the survey found that 64 percent of supply purchases for back-to-school are influenced by school requirements. In addition, 45 percent of parents buying electronics were influenced by their schools.

When it comes to where consumers will finish their shopping, 53 percent will head to discount stores, 51 percent to department stores, 39 percent to clothing stores and 37 percent to office supply stores. More will shop online this year, 31 percent compared with 27 percent last year, the highest in the survey’s history.

“When it comes to big spending events such as back-to-school and back-to-college, families are being very savvy in how they tackle their lists,” Prosper Principal Analyst Pam Goodfellow said. “Families are slowly completing their shopping this season while taking advantage of expected promotions that will continue through Labor Day, and spreading their budget as necessary.” 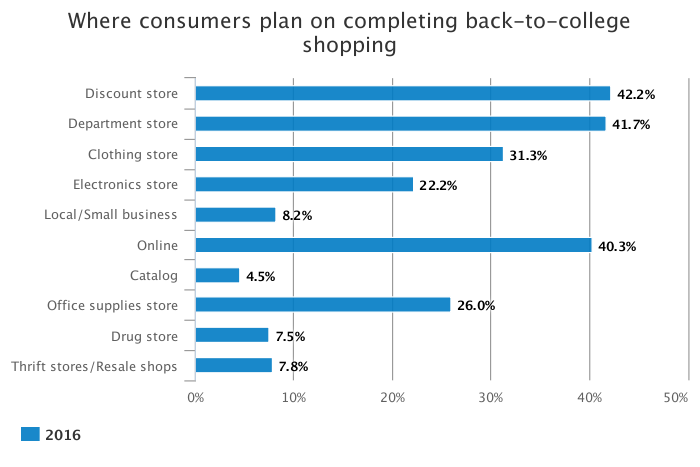 Consumers were asked for the first time which back-to-college items are still needed to complete their shopping lists. According to the survey, 61 percent still need to purchase school supplies, followed by clothing (50 percent) and personal care items (33 percent).

Debit/check cards are the most preferred method of payment for college shoppers, with 44 percent using them. Credit cards continue to make gains, with 36 percent of respondents using them to complete their purchases.

The survey asked 6,915 consumers about both back-to-school and back-to-college shopping plans. It was conducted August 2-9 and has a margin of error of plus or minus 1.2 percentage points.

If you are a member of the press and require additional information or insight about our back-to-school and college survey results, please contact Ana Serafin Smith at press@nrf.com.