Dads head out to the ballgame as Father’s Day spending reaches record-high of $15.5 billion

"This is a positive sign of strong consumer confidence heading into the second half of the year, and a good deal for all the dads who will reap the benefits.”

WASHINGTON – Americans are expected to spend more than ever on gifts for Father’s Day this year with the biggest share going to special outings like a ballgame, concert or dinner, according to the National Retail Federation’s annual survey conducted by Prosper Insight & Analytics.

Father’s Day shoppers are expected to spend an average $134.75 for the holiday, up from last year’s $125.92. With 77 percent of consumers surveyed celebrating, total spending is expected to reach $15.5 billion. That’s the highest number in the survey’s 15-year history, topping last year’s previous record of $14.3 billion.

“It’s encouraging to see that consumers are spending on special occasions such as Father’s Day,” NRF President and CEO Matthew Shay said. “This is a positive sign of strong consumer confidence heading into the second half of the year, and a good deal for all the dads who will reap the benefits.”

The survey found 27 percent of dads would love to receive a “gift of experience” for Father’s Day — and 25 percent of shoppers plan to grant that wish with gifts like tickets to a concert or a sporting event. When dinners, brunches and other types of “fun activity/experience” are included, consumers plan to spend $3.3 billion on special outings, which will be given by 48 percent of those surveyed. 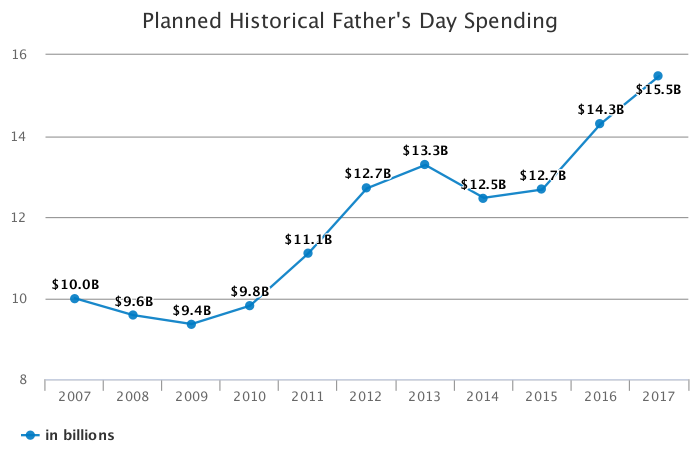 Next up on the spending list is $2.2 billion on gift cards (given by 43 percent), followed by $2.2 billion on clothing (46 percent) and $1.8 billion on consumer electronics (21 percent). Personal care products such as a bottle of cologne (21 percent) total $888 million, slightly edging out home improvement supplies (16 percent) at $885 million. Greeting cards are the most common gift, purchased by 64 percent of consumers, but only account for $861 million of projected spending.

“With shoppers planning to be more generous to dad this year, the personal care category will be one to watch,” Prosper Principal Analyst Pam Goodfellow said. “Planned spending on items like cologne, aftershave and razors rose nearly 20 percent year-over-year, outpacing growth in every other gift category for Father’s Day.” 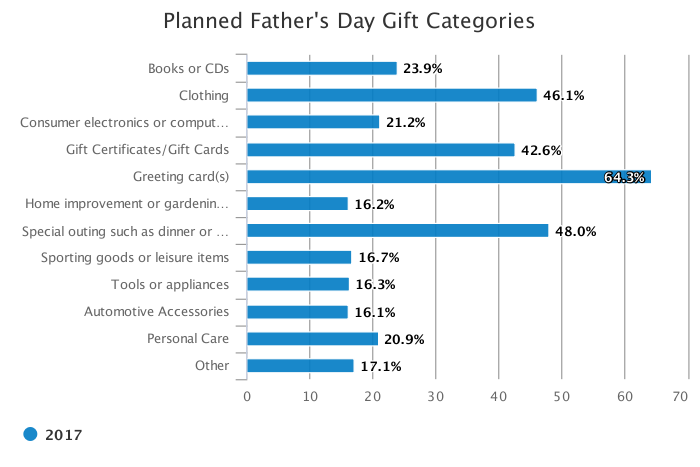 More than half of those surveyed plan to buy for their fathers or stepfathers (54 percent) while others will shop for their husbands (29 percent) or sons (10 percent).

The survey of 7,335 consumers was conducted May 2-9 and has a margin of error of plus or minus 1.2 percentage points.

About Prosper Insights & Analytics
Prosper Insights & Analytics delivers executives timely, consumer-centric insights from multiple sources. As a comprehensive resource of information, Prosper represents the voice of the consumer and provides knowledge to marketers regarding consumer views on the economy, personal finance, retail, lifestyle, media and domestic and world issues. www.ProsperInsights.com