Imports could hit new record as busy merchants stock up

WASHINGTON – July and August should be two of the busiest months ever seen for imports at the nation’s major retail container ports, possibly setting a new record as merchants enter the back-to-school season and begin to stock up for the holiday season that will follow, according to the monthly Global Port Tracker report released today by the National Retail Federation and Hackett Associates.

“We’re expecting retailers to import some of the largest volumes of merchandise ever,” NRF Vice President for Supply Chain and Customs Policy Jonathan Gold said. “That’s a good indicator of what could be ahead for consumer demand and retail sales, and it’s a sign that retail is going strong despite what you might read in the headlines.”

Ports covered by Global Port Tracker handled 1.72 million Twenty-Foot Equivalent Units in May, the latest month for which after-the-fact numbers are available. That was up 7.3 percent from April and up 6.2 percent from May 2016. One TEU is one 20-foot-long cargo container or its equivalent.

The August figure would be the highest monthly volume recorded since NRF began tracking imports in 2000, topping the 1.73 million TEU seen in March 2015. The 1.7 million-plus numbers seen in May, July, August and October represent four of the six busiest months in the report’s history. 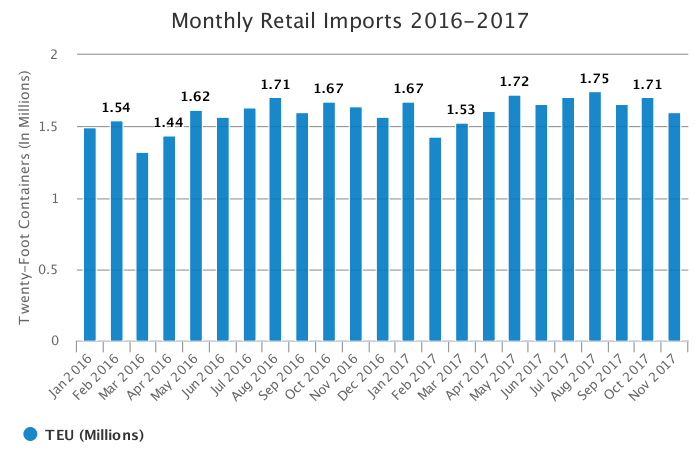 Hackett Associates Founder Ben Hackett, an internationally known economist who prepares Global Port Tracker for NRF, said the increases in imports have come despite threats by the Trump administration to impose new limits on international trade.

“Some actions to date appear to have alienated traditional allies and are causing them to work more closely together, leaving the United States on the sidelines,” Hackett wrote in his monthly editorial comment in the report. “ ‘America First’ may well result in protectionist actions that will cut the United States off from the benefits of the global value chain and economic growth for U.S. importers and exporters.”