"When imports break records two months in a row, it's hard to see that as anything other than a good sign."

WASHINGTON – Imports set a second all-time monthly record high this summer as retailers brought in merchandise for the busy holiday season, and are continuing at unusually high levels this month, according to the monthly Global Port Tracker report released today by the National Retail Federation and Hackett Associates.

“When imports break records two months in a row, it’s hard to see that as anything other than a good sign about what retailers expect in consumer demand,” NRF Vice President for Supply Chain and Customs Policy Jonathan Gold said. “Consumers are buying more, and everybody from dockworkers to truck drivers is trying to keep up. We hope this is a sign of a strong holiday season for retailers, shoppers and our nation’s economy.”

Ports covered by Global Port Tracker handled 1.8 million Twenty-Foot Equivalent Units in August, the latest month for which after-the-fact numbers are available. The volume was the highest recorded since NRF began tracking imports in 2000, topping the previous record of 1.78 million TEU set just one month earlier in July. The record before that had been 1.73 million TEU in March 2015. August was up 1.4 percent over July and 5.6 percent over August 2016. A TEU is one 20-foot-long cargo container or its equivalent.

The import numbers come as NRF is forecasting that 2017 retail sales  will grow between 3.2 and 3.8 percent over 2016 and that this year’s holiday sales will grow between 3.6 and 4 percent. Cargo volume does not correlate directly with sales because only the number of containers is counted, not the value of the cargo inside, but nonetheless provides a barometer of retailers’ expectations. 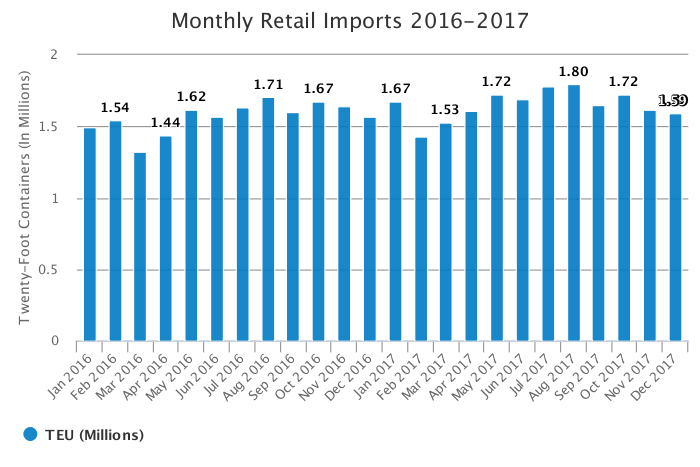 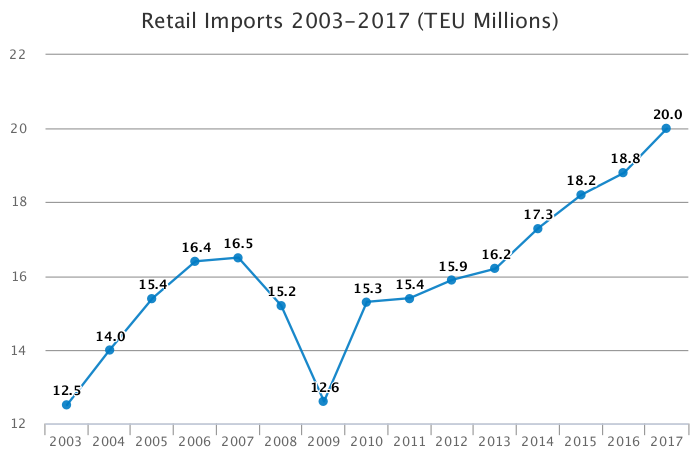 “The volume of containers imported through August continues to grow and we expect this to continue through October before a slack period arrives as the holiday season inventory buildup comes to an end,” Hackett Associates Founder Ben Hackett said. “We do expect growth in imports to slacken off in the coming year, but it will still remain positive.”