"With warmer than average weather so far this summer, Americans should be in the mood to head outside to celebrate, whether it’s watching fireworks or firing up the BBQ."

WASHINGTON – Americans are expected to spend $7.1 billion on food for cookouts and picnics as they celebrate the Fourth of July this year, up from $6.8 billion in 2016, according to the annual survey released today by the National Retail Federation and conducted by Prosper Insight & Analytics.

“With warmer than average weather so far this summer, Americans should be in the mood to head outside to celebrate, whether it’s watching fireworks or firing up the BBQ,” NRF President and CEO Matthew Shay said. “Retailers will be well-stocked with everything from flags to burgers to help Americans prepare for their holiday activities.” 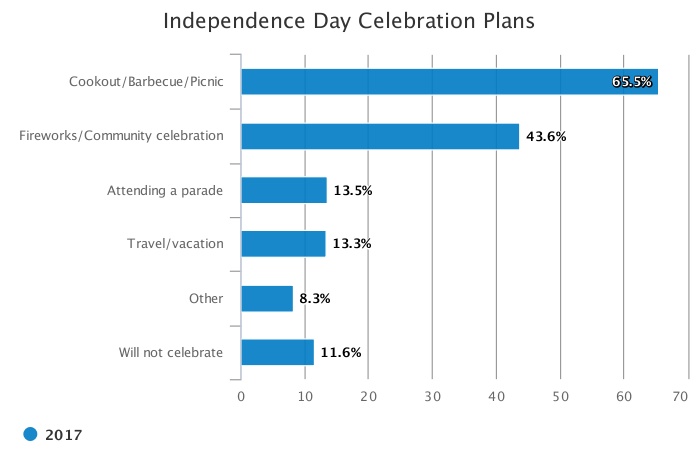 When it comes to other activities to celebrate Independence Day, 44 percent of Americans will attend a firework show or community celebration and 14 percent will watch a parade.

The holiday weekend is also a popular time for travel, with 32.9 million Americans saying they will head out of town (13 percent of those celebrating), up from 31.1 million from last year. Only 18 percent say the price of gasoline will affect their plans, down from 21 percent last year and a record low since the survey began in 2004. The number who said high gas prices would discourage them from spending for Independence Day peaked at 59 percent in 2008.

“With more Americans planning to travel this Independence Day, gas prices are far less of a factor than they were in previous years,” Prosper Insights Consumer Insights Director Pam Goodfellow said. “Many consumers will take advantage of low gas prices by taking long road trips with their family or heading to the beach for a long weekend.”

The survey of 7,258 consumers was conducted June 5-13 and has a margin of error of plus or minus 1.2 percentage points.