NRF says consumers plan to save their tax refunds for later

Consumers are leveraging their tax returns to build up their savings, but that’s good news in the long run because money saved today is money that can be spent down the road, particularly during the back-to-school and holiday seasons later this year.

WASHINGTON — A record low number of Americans will spend their tax returns this year while the second-highest number on record will put the money into savings, according to the annual tax return survey released today by the National Retail Federation and Prosper Insights & Analytics.

“Financial security continues to be top-of-mind for all Americans, and consumers are hanging on to their tax refunds tighter than ever,” NRF President and CEO Matthew Shay said. “Consumers are leveraging their tax returns to build up their savings, but that’s good news in the long run because money saved today is money that can be spent down the road, particularly during the back-to-school and holiday seasons later this year.”

Of the 66 percent who are expecting a refund this season, only 20.9 percent of consumers will spend their refunds on everyday expenses, 8.7 percent will use them for major purchases such as a television, furniture or a car, and 7.6 percent will splurge on special treats like dining out, apparel or spa visits. The numbers are down from 22.4 percent, 9.2 percent and 8.3 percent last year, respectively, and are record lows in the history of the survey. The number planning to spend the money on vacations dropped to 10.7 percent from last year’s 11.4 percent, the lowest since 10.3 percent in 2013. In addition, 8.8 percent plan to use their refund on home improvements. 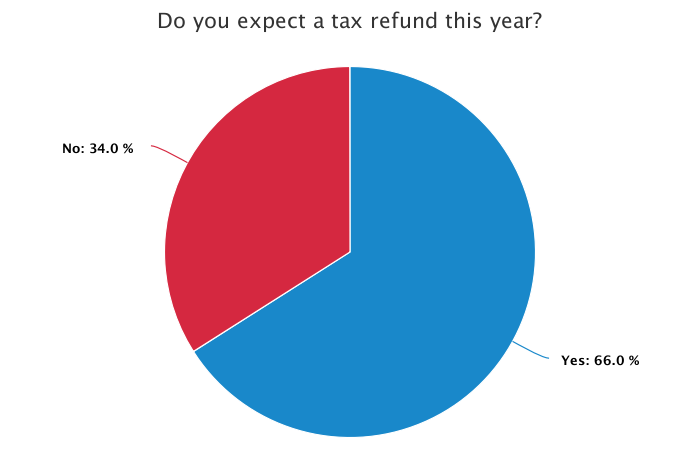 Rather than spending their refunds, 48 percent of consumers plan to put the money into savings, second only to last year’s record high 49.2 percent. In addition, 35.5 percent will use the money to pay down debt, up from 34.9 percent last year but far below the peak of 48 percent seen in 2009.

“Millennials are mindful of how they spend their hard-earned money these days, especially when it comes to any refund they expect from their taxes,” Prosper Consumer Insights Director Pam Goodfellow said. “Although Millennials and Gen X are focused on allocating their refunds to savings or reducing their debt, young adults are also apt to seize the opportunity to treat themselves to a little discretionary spending.”

According to the survey, 68 percent of Americans plan to file their taxes online, the most in survey history. About two in five (39 percent) will use computer software to prepare their taxes on their own, while 21 percent will hire an accountant, 13 percent will prepare their taxes manually and 10 percent plan to have a spouse, friend or relative help. With nearly one in five (18 percent) planning to hire tax preparation firm, consumers are poised to spend $5.8 billion on these services, which averages to $131.66 per person among this group of filers. 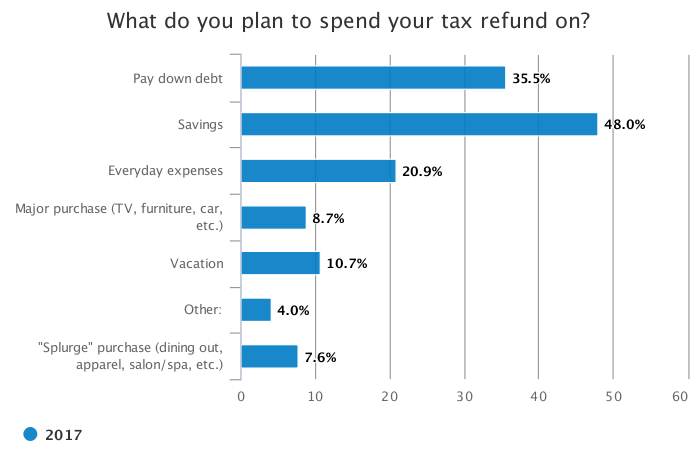 Of those surveyed, 22 percent have already filed their taxes, 37 percent plan to do so in February, 26 percent will file in March and 15 percent will take their time and file at the last minute in April.

The survey, which asked 7,609 consumers about their tax return plans, was conducted February 1-8 and has a margin of error of plus or minus 1.1 percentage points. Full data results will not be published on NRF.com but news media and analysts who require additional information can contact press@nrf.com.