“With the holidays past us, consumers are looking forward to spending time with friends and family for some good old-fashioned fun to celebrate the big game.”

American consumers will spend an average of $75 for a total of $14.1 billion as an estimated 188.5 million watch the Atlanta Falcons face the New England Patriots in Super Bowl LI on February 5, according to the National Retail Federation’s annual Super Bowl Spending Survey conducted by Prosper Insights & Analytics. Viewership is about the same as last year’s 188.9 million but the spending is down from an average of $82 and a total of $15.5 billion.

“With the holidays past us, consumers are looking forward to spending time with friends and family for some good old-fashioned fun to celebrate the big game” NRF President and CEO Matthew Shay said. “Retailers will help fans prepare by making sure they are well stocked on decorations, party food, accessories and other Super Bowl necessities.” 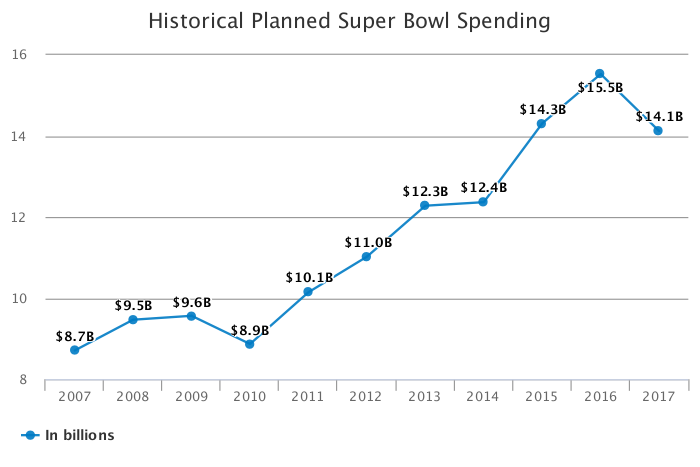 According to the survey, the 45 million people hosting a Super Bowl party should expect a full house, with 27 percent of those surveyed planning to attend a party to celebrate the big game. Bars and restaurants can also expect a good turnout with 12.4 million people planning to head out to watch at their favorite local spot.

Over 43 percent of viewers say the most important part is the game itself, 24 percent cite the commercials,15 percent want to hang out with friends, and 12 percent of say the half-time show is their top highlight. 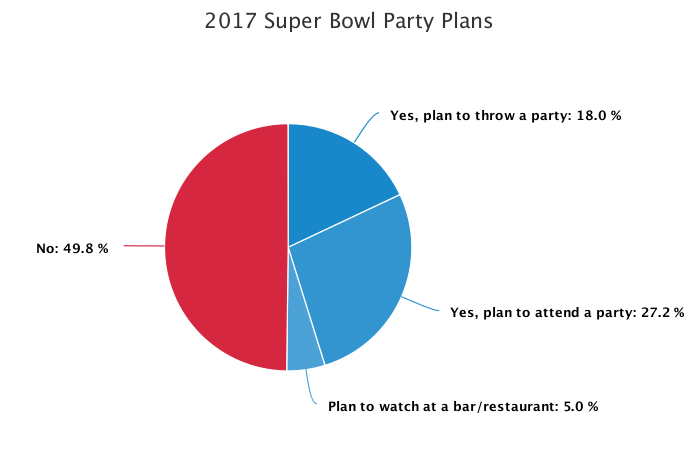 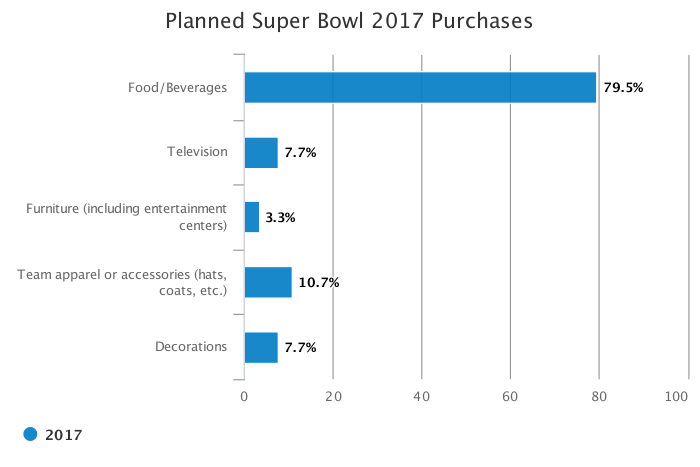 “As a favorite American past-time, the Super Bowl is a great chance for viewers to reconnect with friends and family after having a nice break after the holiday season,” Prosper Principal Analyst Pam Goodfellow said. “Even though the number of viewers is slightly down this year, plenty are still planning to enjoy the day by watching it at their favorite bar or friend’s place, wearing their lucky jerseys and hoping their favorite team wins.”

The survey, which asked 7,591 consumers about their Super Bowl plans, was conducted January 4 -11 and has a margin of error of plus or minus 1.1 percentage points. Full data results will not be published on NRF.com but news media and analysts who require additional information can contact press@nrf.com.