"Retailers are making sure the gifts that need to be under a tree are waiting on the shelves."

WASHINGTON – Imports at the nation’s major retail container ports are expected to be up 3.2 percent this month over the same time last year as stores bring in the last of the merchandise for the holiday season, according to the monthly Global Port Tracker report released today by the National Retail Federation and Hackett Associates.

“There’s still shopping to be done, and retailers are making sure the gifts that need to be under a tree are waiting on the shelves,” NRF Vice President for Supply Chain and Customs Policy Jonathan Gold said. “Imports are up a healthy amount over this time last year, and that’s a good sign for holiday sales and the economy.”

Ports covered by Global Port Tracker handled 1.67 million Twenty-Foot Equivalent Units in October, the latest month for which after-the-fact numbers are available. That was up 4.6 percent from September and up 7.4 percent from October 2015. One TEU is one 20-foot-long cargo container or its equivalent.

With cargo growth at covered U.S. ports for the year coming in at only 2 percent, Hackett Associates Founder Ben Hackett said a trend of imports exceeding growth of gross domestic product appears to have ended. “This is a new phenomenon,” Hackett said. “It was not long ago when industry leaders were doing their forecasts based on trade growth outpacing GDP by a ratio of more than 2-to-1. Those days are gone.” 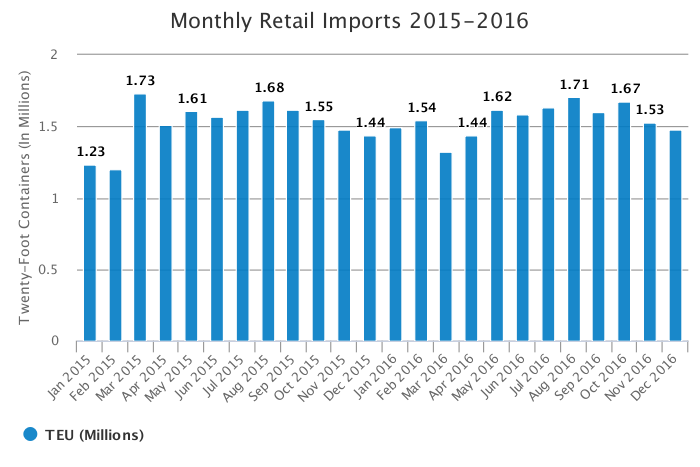