Consumers plan to put themselves on the top of shopping lists
For immediate release
press@nrf.com
(855) NRF-PRESS

With the election falling in the middle of holiday shopping, as of mid-October many U.S. consumers say they will have a more conservative holiday spending budget this year. According to the National Retail Federation’s annual consumer spending survey conducted by Prosper Insights & Analytics, consumers plan to spend an average of $935.58 during the holiday shopping season. Total spending includes gifts for others, self-spending, food, flowers, decorations and greeting cards for Christmas, Hanukkah and Kwanzaa. Total planned spending this year is second only to the record total spending in 2015, at $952.58. 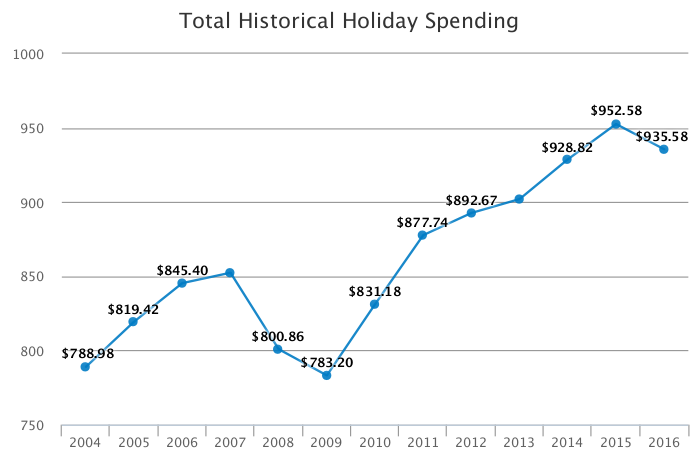 “Everywhere you turn — whether you’re picking up a newspaper or watching television — political advertisements are taking up ad space that retailers typically use to get holiday shopping on the minds of consumers across the country,” NRF President and CEO Matthew Shay said. “Once the election has passed, we anticipate consumers will pull themselves out of the election doldrums and into the holiday spirit.”

“Retailers should prepare for a rush of consumers in the weeks following the presidential election as they get more economic and political certainty and are looking to take advantage of promotions and deals that are too good to pass up.”

In a separate NRF flash poll conducted last week, more than a quarter of consumers say the election will impact their spending plans for the holidays. In addition, 43 percent say they are being more cautious with their spending due to the uncertainty of the election season. However, when push comes to shove, 87 percent of consumers could be convinced to spend an extra $25 this holiday season if tempted by a good sale or promotion, the perfect gift for themselves or others or free shipping. *

“Retailers should prepare for a rush of consumers in the weeks following the presidential election as they get more economic and political certainty and are looking to take advantage of promotions and deals that are too good to pass up for their friends, family and even themselves,” Shay said.

Fifty-eight percent of consumers plan to buy for themselves, spending an average of $139.61, up 4 percent from last year’s $133.74 and marking the second-highest level of personal spending in the survey’s 13-year history. “Many shoppers are taking the approach of ‘one for you, two for me’ this holiday season,” Shay said. “Retailers are preparing by offering a wide array of merchandise and promotions — items shoppers want to give as great gifts at prices so good they want to buy for themselves too.”

According to the survey, consumers say they will spend $588.90 on gifts for others and $207.07 for items such as food, decorations, flowers and greeting cards this year. 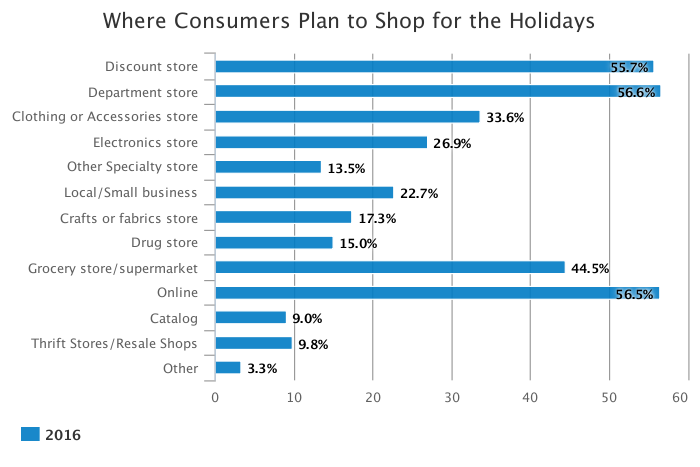 Consumers will shop around, splitting their time almost evenly between three top destinations: department stores (57 percent), online (also 57 percent) and discount stores (56 percent). The survey found 45 percent plan to visit a grocery store/supermarket, 34 percent will shop at clothing stores, 27 percent at electronics stores and 23 percent at small or local businesses. Ten percent of those shopping plan to visit outlet stores, a new category added to the survey this year. 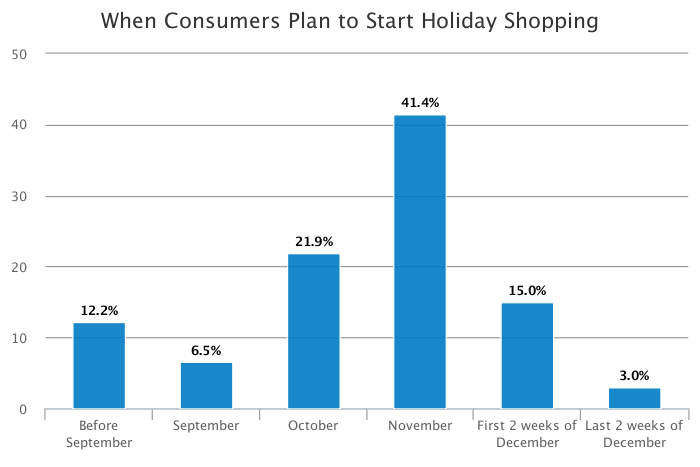 Close to half of consumers have been tackling their holiday lists early again this year, with 41 percent saying they started shopping in October or earlier. The same percentage said they will start in November, and 18 percent will wait until December. Of the early shoppers, 63 percent say they are trying to spread out their budgets while 49 percent want to avoid the crowds and stress of last-minute shopping.

“While many holiday shoppers are starting early on their gift lists, millennials are waiting to catch the best deals for their gifts, with nearly half (46 percent) waiting until November to start shopping,” Prosper Insights Principal Analyst Pam Goodfellow said. “Younger consumers are likely to be looking forward to the Thanksgiving/Black Friday shopping ‘experience’ — and know that retailers will be offering great promotions that weekend.”

The Prosper Analytics & Insights survey, which asked 7,733 consumers about holiday shopping plans, was conducted October 4-11 and has a margin of error of plus or minus 1.1 percentage points. The survey reflects a snapshot of consumers’ spending plans during that moment in time.

For information on NRF’s economic forecast, which is based on an economic model using indicators such as housing data, unemployment and previous monthly retail sales reports, see here.

*The NRF flash poll, conducted by ORC International on October 20-23, asked 1,021 consumers about their spending plans considering the upcoming election, and has a margin of error of plus or minus 3.1 percentage points.

Full data results surrounding this survey will not be published on NRF.com. If you are a member of the press or an analyst and require additional information on our Holiday survey results, please contact Ana Serafin Smith at press@nrf.com.