"Retailers don't import merchandise unless they think they can sell it."

“We won’t see final sales numbers for a few more days, but import volume suggests that retailers had a strong holiday season,” NRF Vice President for Supply Chain and Customs Policy Jonathan Gold said. “Retailers don’t import merchandise unless they think they can sell it.”

Ports covered by Global Port Tracker handled 1.64 million Twenty-Foot Equivalent Units in November, the latest month for which after-the-fact numbers are available. That was down 1.6 percent from October since most imported holiday merchandise had already arrived but up 11.2 percent from November 2015. Global Port Tracker had previously predicted a year-over-year increase of 3.6 percent. One TEU is one 20-foot-long cargo container or its equivalent.

December was estimated at 1.54 million TEU, up 7 percent year-over-year rather than the 3.2 percent that had been expected.

Cargo volume does not correlate directly to sales because only the number of containers is counted, not the value of the cargo inside, but nonetheless provides a barometer of retailers’ expectations. NRF’s annual forecast called for $655.8 billion in 2016 holiday sales during November and December, a 3.6 percent increase over 2015. November sales were up 5 percent year-over-year, and the Commerce Department is scheduled to release December numbers on Friday.

“Economic data is fickle by nature – it surges and falls and often surprises us,” Hackett Associates Founder Ben Hackett said, referring to sometimes-contradictory economic numbers seen over the past year. “There is both optimism and pessimism and pointers showing growth as well as decline. 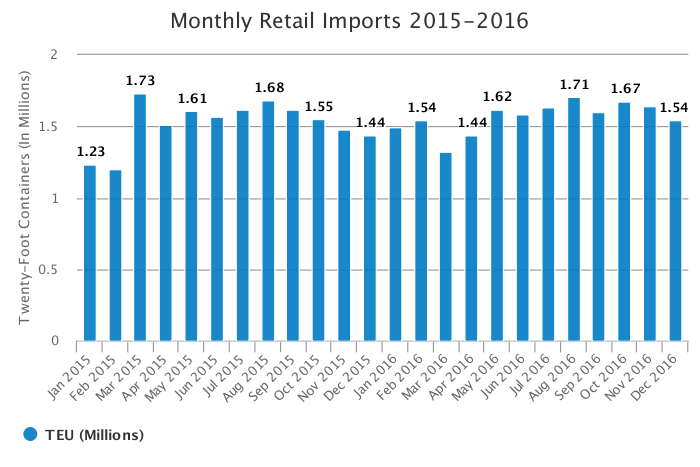